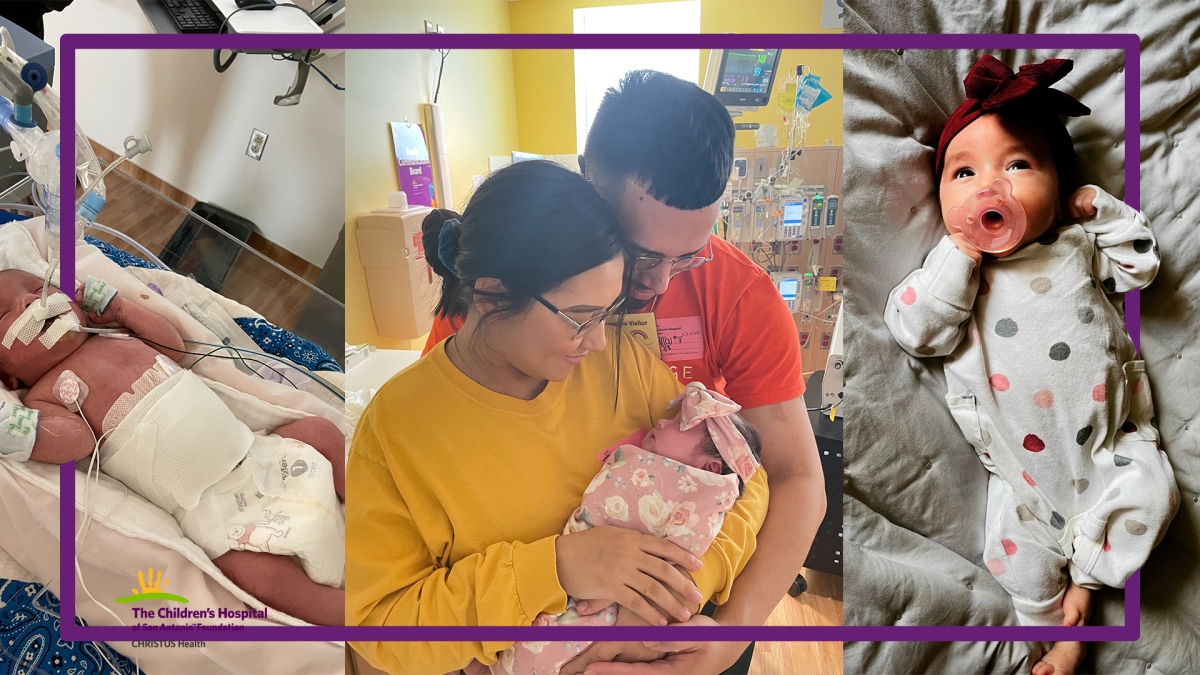 It was Halloween and Desirae and Christian Ruiz were sitting in the Walgreens parking lot dressed as cowboys and staring at a pregnancy test they had just taken. They were shocked when they saw it was positive! They were over the moon to learn they were pregnant for the first time, and so were their parents. After a challenging year dealing with the pandemic, the promise of a new baby brought everyone immense joy.

The family held a small gender reveal party and learned that Desirae and Christian were having a baby girl. It was a sweet experience and a special way to mark the impending arrival of baby Aria.

Desirae’s pregnancy got off to a rocky start.

“I had a lot of nausea, which I wasn’t used to, and I couldn’t hold anything down,” said Desirae. “It was miserable, and I felt awful the entire time.”

When Desirae was 20 weeks pregnant, she went in for her sonogram. What she thought would be a routine appointment to check on Aria’s progress turned out to be an anxiety-filled event. The technicians performing the scan told Desirae that she should not miss her next appointment with her obstetrician under no uncertain terms. But they did not tell her why.

“The whole situation gave me a lot of anxiety because the technician was not willing to further explain  what she saw or what she thought she saw. I just remember getting into my car and just sobbing,” said Desirae.

A couple of weeks later when Desirae received a call from the clinic, she learned that her baby had what was known as gastroschisis. This is a condition where a hole develops in the umbilical cord, and the intestines leak out into the amniotic cavity.  Aria would need one or more surgeries immediately after birth to place the intestines back inside.

“When I found out, I couldn’t breathe or talk. I was just crying. My world was turned upside down,” she said.

So, Desirae made an appointment at the high-risk clinic to learn more. Because it was during the height of the COVID-19 pandemic, her husband could not go with her. She was alone. She remembers feeling like she did something wrong and had a lot of guilt, but the doctors reassured her that gastroschisis is something that just happens, and there’s no good explanation for it.

Her obstetrician decided the best course of action would be for Desirae to deliver her baby at The Children’s Hospital of San Antonio and meet with Dr. Kathy Barsness, a pediatric surgeon who specializes in this type of surgery.

“When we went to go meet with Dr. Barsness, she was amazing. She told us at least half a dozen times that we were all going to be OK. She walked us through all possible scenarios and explained what life would be like after Aria was born. She was so accommodating and really eased our anxiety,” said Desirae.

Throughout the rest of her pregnancy, Desirae felt a myriad of emotions. Even though she’d been told that Aria’s condition was not her fault, she was still riddled with guilt. She had some depression, too. Together, she and Christian leaned on their faith and did a lot of praying. They started seeing the high-risk doctors once a week and her obstetrician every other week – it was a time full of worry and stress.

To help calm her fears, Desirae found a support group online called “Avery’s Angels.” The group was full of mothers whose babies had surgeries shortly after birth and grew up to lead healthy and productive lives.

“Finding that group was awesome for us. Being able to connect with other moms and chat with them brought me a lot of peace,” said Desirae.

Fast forward a few weeks later, Desirae went to one of her regularly scheduled appointments.

“I remember that morning being super hectic. We somehow overslept and were rushing to our appointment,” remembers Desirae. “When we got there, the nurses doing the sonogram realized that Aria hadn’t moved in 10 minutes. Next thing you know, they were telling me it was time to deliver Aria and that I needed to head to the hospital. I couldn’t believe it; I was going to be having my baby that day!”

Despite Desirae’s desire to have a vaginal birth, her team at Children’s thought it best for her and Aria if they performed a C-section. It was not what Desirae wanted for her first-born child, but she understood why it needed to be that way.

“So many things didn’t look like we wanted them to with this pregnancy,” said Desirae. “It was just another thing, but we knew that a C-section was the safest thing for our baby.”

At 4:34 p.m., Aria was born. It wasn’t until 1 a.m. the following day that Desirae was able to meet her baby girl in the neonatal intensive care unit (NICU) as she recovered from her C-section. Even though her intestines were outside of her body, Aria’s vital signs were good. Her heart was stable, and initially, she was on a breathing tube.

Looking back, Desirae says that meeting with Dr. Barsness and the talking with the moms in the support group really helped prepare them for what Aria would look like when she was born and helped to alleviate some of their fears.  Desirae and Christian treasured the moments when they held Aria’s tiny hands and feet – the only contact they could have.

At that point, the goal was to get Aria’s intestines back in her body. They put her intestines in a clear bag and balanced them on a white bar above her body and then they used gravity to allow her intestines slowly back into their body. Every day, they would push the intestines deeper into her stomach and verify that the intestines were adequately oxygenated.

Because of Aria’s atresia, they were doubtful this would happen, but miraculously, it did. Once her intestines were back in her body, they X-rayed her and discovered air flowing from stomach all the way to her rectum. She no longer had a blockage. She experienced a lot of breathing issues because there was a lot of pressure on her lungs from her stomach and intestines. It was a matter of waiting for Aria to respond and for the intestines to decrease in size.

“We are sure that there was a lot of science to it, but we just felt like God had moved a mountain, that He had performed a miracle for us by removing that blockage,” said Desirae.

Now that the intestines were safely back in her body, the next big milestone for Aria would be for her to have a bowel movement. The whole family rallied around her and wished for poop. They even created a special hashtag: #prayforpoop.

Desirae remembers the timeline well. On June 23, her intestines were finally back inside her body, and they learned there was no blockage and two weeks later Aria had her first bowel movement. Afterward, they kept her on IV fluids to receive her nutrition and she also remained on supplemental formula. Shortly after, she was able to start regular feedings.

“I feel so blessed that Dr. Barsness came to The Children’s Hospital of San Antonio,” said Desirae.
The way she did the suture-less closing was a huge benefit and saved our little Aria from a traditional surgery that normally happens for this condition. She benefited from it tremendously because another concern we had was the cosmetic scar left on gastroschisis kids across their tummies and we didn’t want that for her. Her belly button will look completely normal.”

Aria spent 36 days in the NICU. Gradually, she was able to increase her milk, and as of late, she eats between 75 to 90 milliliters every three hours. She was able to go home on July 23.

“We are overjoyed to have her home and she’s doing awesome. She poops four times a day and has urine output every time she eats which is exactly what our doctors want to see from her,” said Desirae.

Her doctors don’t anticipate Aria will need another surgery. Her intestines popped into place. She is currently underweight, but as long as she continues to gain at a steady pace, she will be OK.

Looking back at her daughter’s experience, Desirae is grateful to the entire NICU team for their unconditional care of Aria.

“They truly made this process so much easier and relieved our anxiety, especially as first-time parents,” said Desirae. “Leaving our baby overnight and for multiple hours a day while we worked was hard, but we knew she was in great hands and that they were intentional about everything they did for her.”

Desirae said she and Christian are particularly indebted to Dr. Maria Pierce in the NICU and to Dr. Barsness. They felt like both were rooting for Aria and always had her best interests at heart.

“I am appreciative for Dr. Pierce. You could really see that she was excited when Aria did well and that she really felt it when Aria had some setbacks,” said Desirae. “We felt cared for just at a deeper level.”

Desirae is also looking forward to her continued journey with Dr. Barsness who they will be seeing regularly throughout Aria’s life. “We are very excited for the relationship we’re going to continue to build and we’re so thankful and grateful that she is just so excellent in her craft and was able to give Aria  a better quality of life.”