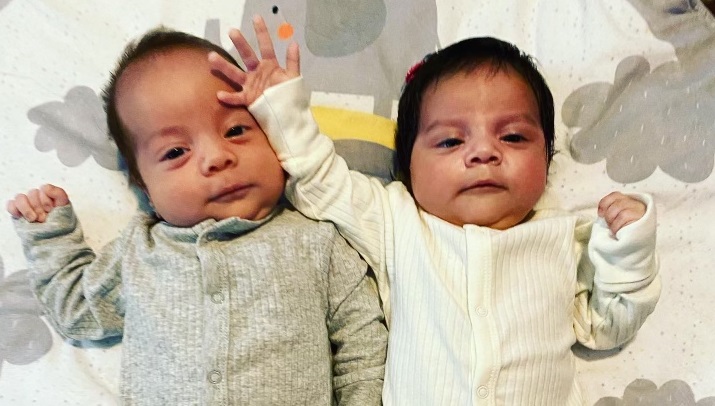 Karina Gonzalez and her husband, Isaac, were excited about the prospect of having a third child to round out their family. Never in their wildest dreams did they imagine having twins.

“I was by myself at the doctor’s office because of COVID and had to FaceTime Isaac to tell him the news. We were definitely in a bit of shock. Having twins runs in my mom’s family, but I never thought it would happen to me,” said Karina.

Karina’s pregnancy was uneventful – something she was grateful for, especially after experiencing a miscarriage and a difficult pregnancy with her last child. She and her husband grew more excited when they learned they were having both a boy and a girl: Isaiah and Ilani.

At about 31 weeks, the week of her baby shower, Karina went to the doctor to see how the babies were progressing. They did the anatomy scan and measured both the babies, and everything seemed fine. Once again, she had to go alone because of the pandemic.

It was when the ultrasound tech was checking Ilani that Karina grew concerned.

“The tech was taking a little bit longer than usual, and I wondered if she had detected an issue with Ilani’s heart,” said Karina. “I knew that the tech wouldn’t be able to tell me anything, so I didn’t ask but had a sinking feeling that something was wrong.”

Karina’s regular doctor was not available, so she spoke to Dr. Javier Castillo, a maternal-fetal medicine specialist by phone. He explained to Karina that it was not Ilani’s heart they were concerned about; it was her stomach and intestines.

Upon reviewing Ilani’s ultrasound, it was determined that her stomach and intestines were up in her chest cavity, a condition known as congenital diaphragmatic hernia or CDH.

The doctor told her not to Google “CDH” and just wait to visit with him in person to get all her questions answered.

This time, Isaac was able to go along with Karina for her appointment. They did another ultrasound and confirmed that Ilani did in fact have left-sided CDH.

“There was a hole in her diaphragm, and her organs were moving up into her chest cavity, which in itself was scary to hear,” said Karina. “But the bigger issue was that they couldn’t tell whether or not her lung was developing correctly because her intestines and other organs were being pushed up, and they couldn’t see it.”

Dr. Castillo explained why the CDH could have been easily missed on the ultrasound. He also described a procedure they could do while she was pregnant where they would insert a needle into Karina’s belly button. From there, they would put a balloon inside of Ilani that would inflate and push the organs back down. Unfortunately, Karina was too far along in her pregnancy for them to perform this procedure.

Karina recalls how she felt in those moments: frightened and anxious. She ended up canceling her baby shower after learning there was a 50/50 chance that Ilani would be stillborn.

After learning about Ilani’s CDH, Dr. Castillo sent Karina to The Children’s Hospital of San Antonio to meet with Dr. John Doski, a pediatric surgeon, who would operate on Ilani after she was born. They also planned for Karina to deliver the twins there.

“After speaking with Dr. Doski, I knew my baby would be in good hands,” said Karina. “He explained that they had all of the equipment they needed to perform the surgery successfully. If she needed a heart and lung machine, or extracorporeal membrane oxygenation (ECMO), they would have it available.”

Three weeks later, when she was 37 weeks along, on June 21, Dr. Kimberly Crittenden, an OB-GYN at The Children’s Hospital, delivered Karina’s twins.

“Delivery day was super stressful. It was terrifying because, for so long, your babies are safe inside you. And then all of a sudden, they aren’t anymore, and they are out in the world,” said Karina.

As soon as Ilani was born, Dr. Sowmya Mohan, the neonatologist at Ilani’s delivery, intubated her right away in the delivery room and then took her to the neonatal intensive care unit (NICU) to begin monitoring her. In the meantime, Isaiah was doing well and didn’t have any issues– a blessing for Karina and Isaac.

“The first couple of weeks were really hard because when we went up to go see her, she was intubated and sedated and had tubes and all sorts of things on her,” remembers Karina.  “I was glad that she was alive because they told me this is a very serious condition and my biggest fear was that she wouldn’t even make it after birth, but she did and she was good … and I was so grateful!”

The nurses monitored her closely and helped her get strong enough for surgery. When she was four days old on June 25, Ilani was strong enough to have surgery. The entire time the doctors and nurses kept Karina and Isaac updated, letting them know what was happening. The surgery was a success, and Ilani did well.

Doctors told Karina and her family that Ilani can lead a normal life. She may need some occupational and physical therapy to help her with her development, but besides that, her doctors don’t foresee any long-term effects. Some children born with CDH develop heart defects or asthma, but Ilani is doing great.

When Karina reflects on the entire experience, she said without a doubt the uncertainty of everything was the worst part.

“You don’t hear about babies overcoming CDH and being okay, especially in light of how well Ilani has done,” said Karina. “Every time we would go see her in the NICU, the nurses would say how well she has done and that most babies born with the same condition took longer to recover. We are immensely thankful.”

Karina and her family are also grateful to the team at The Children’s Hospital, including the surgeon.

“The fact that Dr. Doski would meet with us and explain things in terms we understood was so comforting. His constant reassurance that our baby girl was in good hands meant the world to us,” said Karina. “I don’t know if there would be enough words to thank him. We are just so grateful and thankful to him for saving our baby.”

After spending 44 days in the NICU, Ilani was strong enough to go home. Her older sisters, age 12 and 4,and her twin brother, Isaiah, are happy she is finally home. Since coming home, she has done well with her feedings and recovery.

“We are definitely happy to be home, but I miss the nurses and staff who I became close to while we were in the NICU. I want to make sure I thank the amazing team of NICU nurses and doctors, specifically our NICU nurse, Melissa who was Ilani’s very first nurse and someone who was such a blessing to us and someone we will never forget. I also want to thank Dr. Doski, Dr. Mohan and Dr. (Maria) Pierce who are not only amazing doctors but are amazing and compassionate people,” said Karina. “This journey has been extremely hard, but I really feel like we’ve been blessed with all the nurses, surgeons, the doctors, everybody. Everybody has been so wonderful and with such a stressful situation we couldn’t have asked for a better group of doctors and nurses. And I can’t say that enough.”